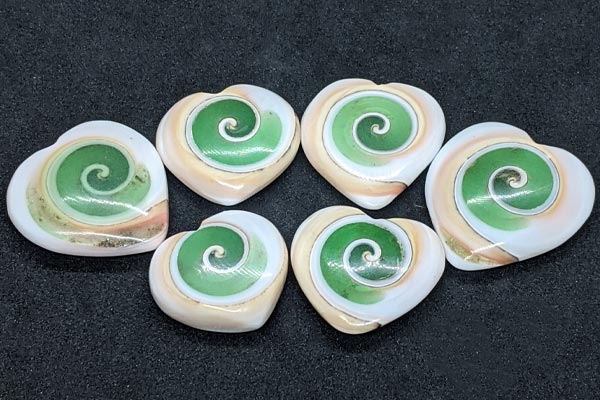 The Shiva Eye Shell comes from a specific type of snail found off the coast of Thailand.  It is the Operculum, or the “trap door” of the shell the snail goes in and out of. These little lovelies wash up upon the shore where locals and craftsmen pick them up. Generally they are about a 1 to 1-1/2 inch round, saucer shape, but my artistic craftsman in Thailand has cut these into little hearts.

This species is known as Turbinidae, and when it is preyed upon, it withdraws into its shell and turns its ‘eye’ toward the attacker in the hope of warding it off. When these snails near the end of their natural life, the protective eye drops away to the sea bed and become what is known as the Shiva Eye shell.

Some say they have been named after the Hindu God, Shiva. The shell represents the Third Eye found in many depictions of Him. I found a whole bunch of meanings associated with this one.  Eyes in general are a symbol of protection as in to "ward off the Evil Eye”.  Since they have come from the sea, they have an ocean-like soothing and serene vibe that brings peace of mind and relaxation.  The Spiral shape has significance too as it represents the Golden Ratio.

Many feel it works well at the 6th or Third Eye Chakra. For myself, I found it really resonated at the 4th, Heart Chakra AND the 1st, Root Chakra. Keeping in mind that the God Shiva was the destroyer and/or transformer those chakra associations kind of made sense. Developing our Root Chakra is an important symbol for security against bad energies. It then rolls up and strengthens optimistic energies flowing towards our Heart Chakra. I definitely felt a strong positive effect on my natural well being. Calming, soothing and just pleasant to hold.

Generally it is used as a meditation crystal to understand yourself and the issues that are happening in your life.

I feel like the lovely green gem at their center is Chrysoprase and sadly, I haven't been able to find any documentation to back that up. BUT I'm sure one of you out there will let me know if you hold that secret. :D I'll update if I learn more.

While there's not a lot, there is some folklore suggesting Shiva Eye Shells are “Mermaids’ Money” and good luck to traveler's and fishermen.

I have a very limited supply of these. I've wrapped a few and left some as just touchstones. Use this link to see what's available -->. 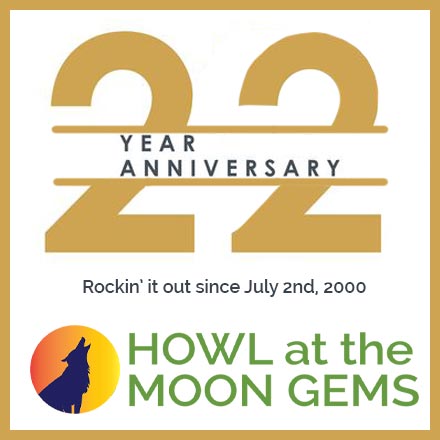