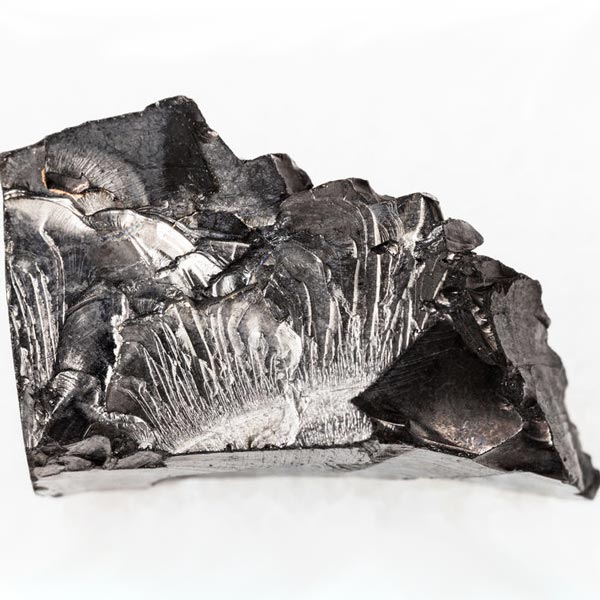 1st, Root or Base Chakra
Color of black and/or red
Sanskrit: Muladhara

Shungite seems to balance the left and right sides of our body, or our ying and yang. If you would like to feel more balance in your masculine and feminine energies, this one will compensate for those imbalances. After working with a piece for a while it provided a feeling of oneness that was quite serene.

Shungite is primarily found in Russia, and the main deposit is in the Lake Onega area of Karelia, at Zazhoginskoye, near Shunga, from which it received its name. It has a biogenic origin (meaning it was produced by living organisms) and is an elementary, non-crystalline carbon being almost pure at about 98% carbon make up. It is a relatively 'soft' stone, and geologists have found that its origins date back around two billion years.

It should be noted that Shungite is one of the only known natural sources of fullerenes, which has made the scientists who have been testing it extremely interested in not only its properties, but how mankind may be able to use it.

What are fullerenes? Carbon nanotubes were originally discovered and synthesized in 1991. After their discovery, tiny quantities of fullerenes were found to be produced in sooty flames, and by lightning discharges in the atmosphere. Then, in 1992, fullerenes were found in the family of minerals known as Shungites. Fullerenes are active molecules that can be used as an antioxidant because they easily react with radicals due to the high affinity of its electron. They are also being used as an anti-aging and anti-damage agent in the cosmetic sector, and there are some claims of use as antiviral agents.

Because of its high concentration of fullerenes, there is a lot of discussion right now as to Shungite's antiviral qualities. In light of the current world-wide pandemic, please understand there is NO SCIENTIFIC EVIDENCE suggesting this. NONE. While there has been discovery of certain beneficial healing properties, and it is being looked at for a future aid to allergic conditions, including asthma, that is the extent of proveable scientific exploration to date.

While we would all love to have this magic bullet at our fingertips to fight Covid-19, again, there is NO SCIENTIFIC EVIDENCE that Shungite has that power. It DOES have good anti-bacterial qualities, which has been proven in water filtering tests, and has been used by many to filter water since the 1990's.

I found using Shungite during meditation very beneficial. Eventually it grounded and centered me. So much so that I actually felt deeply rooted into the earth. I will say I had to start with shorter times and gradually extended my contact to reach that effect. Perhaps, because it is not crystalline in its nature, it seemed to take much more time to align its energies to my own. When it finally did, I experienced a very deep meditative state. The process of attuning to it took about a week, so don't be in a hurry to get in the fast lane with this one. Its harmonizing was a slow and steady process and TOTALLY worth the wait.

Shungite clears and balances our aura and aligns our chakras. It assists our spiritual evolution by acting as a catalyst for growth and transformation, and raises our overall vibration.

Shungite removes negative energies and thoughts and promotes a positive thought process. It also boosts our energy levels and dissolves stress and anxiety.

Shungite is very beneficial when working on focusing your mental energy towards a specific goal. It acts as a conductor of your energy and steers you more strongly towards your desired outcome.

Shungite can help in easing anxiety, insomnia, and even inflammation or acne. And while it might help with inflammation and other physical problems, if you have any type of infection, antibiotics many times would be a more beneficial route to take. Yes, I believe in the power of stones to heal, but advances in science are also real and should never be discounted, but used when a physician advises us to.

Shungite has an affinity with all signs of the zodiac. Its Energy is Projective and Receptive, its Planet is Mercury, and its Element is Earth. The planet Mercury rules over the signs of Gemini and Virgo, which makes it especially powerful for these signs. It is also most powerful when Mercury is in harmonious alignment with other planets.

Shungite has a long history in Russia. Peter the Great, a Czar who ruled Russia, was rumoured to prefer to drink water infused with Shungite minerals. This led to his frequent travels to the Karelia region in Russia, where Shunga is located. Since then, its healing properties have become famous and popular among lay people as well as Czars in Russia.