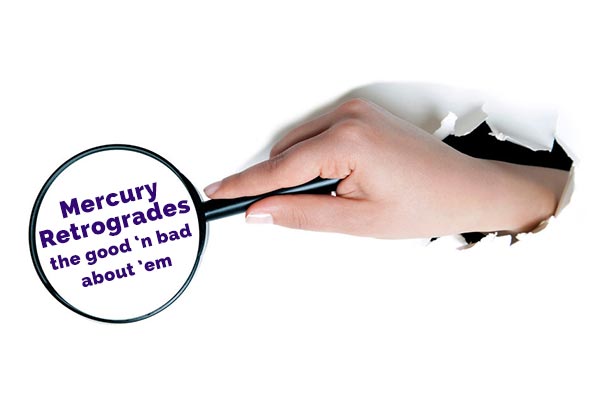 What Does Mercury Actually Take Care of or Govern?

Mercury rules every kind of communication. This would include speaking, listening, learning, reading, editing, researching, negotiating, selling, and buying. It also rules all types of formal contracts, agreements and documents, including things like book manuscripts or term papers, deeds, contracts, leases, wills, and the like.

Technology is included under this planet's domain, it helps us communicate. Computer code, transportation, shipping and travel can be effected when Mercury retrogrades and things in those areas tend to get mixed up or even out of control. Computers crash, flights might be missed, instructions are misunderstood or misinterpreted. There is a whole basketful of things that could go wrong.

So Why Does This Happen?

When a planet retrogrades, astrologically speaking, it is in a resting or sleeping state. And even though Mercury might be taking a snooze, your life goes on. The activities that it governs lack the benefit of a wide-awake planet to 'supervise' them. Many have come to expect a certain degree of craziness during a retrograde and believe when entering into new situations during that time, Rule #1 rules the day: if it can go wrong, it probably will.

Craziness? How Do You Work Around the Craziness?

LOTS of extra communication! It's also helpful to know what Element comes into play in a current retrograde. This particular one falls in an AIR sign, so lots and lots of extra discussion can be a really helpful thing. Check and RE check instructions and travel plans etc. On your computer, save early, save often and make sure you have a good back-up of important things somewhere. The Element of Air is analytical, so do LOTS of research before making any important decisions. You may also be surprised to find something new to solve a problem, just be open to actually taking in some new ideas.

Many Say NOT to to Anything BIG during a Retrograde - Why?

Go back to Rule #1: if it can go wrong, it probably will. That said, life does not stop and sometimes there are things that are okay, or you would actually WANT to do during a retrograde. Anything you have had a history with is okay to revisit. You may have made an offer on property or a vehicle before the retrograde that was turned down. It's okay to make another offer AND seal a deal.

More importantly, if there is something you want to END, this is an awesome time to do so! In severing a bad relationship or breaking a bad habit, this would be the time to do that BIG something and be done with it, send it away!

I'm Immune - I Was Born Under a Mercury Retrograde!

Many astrologers will tell you that you're immune to its effects if you were born under a Mercury retrograde. Ha! Mmmmm NO! Having been born under one myself, I would whole heartedly disagree. I've had an awesome Mac computer totally crash during one. Had two separate property contracts totally fall apart during one. I've been mis-routed in travels during one - several times. Cars have died. So, no, I myself, have not been immune. On the good side of it though, I have also stopped using cigarettes and gotten out of a toxic relationship during one. So, all in all, I'm glad I didn't get that so-called immunity after all.

While sometimes things break or fail, Mercury Retrograde can also be a good time to take a look at where we're at, even if we're forced to. A familiar happening with old friends or relatives is reconnecting during these times (going back), a long time project we've worked on fails, but after pouring over details we then find a better way. Once my washing machine died during a retrograde. Heeding the rule of not making a big purchase, I waited. The day AFTER it left retrograde a flyer arrived in my mail box with a huge sale on them. I saved a couple hundred dollars by waiting.

Personally, I think most of what has 'gone wrong' for me during a Mercury retrograde probably needed my attention any way. It took 'an alignment in the stars' to make me do something about whatever it was. And yes, sometimes tearfully forcing me to be real.

Keeping things in good order lessens the severity of 'surprising' situations. Enjoy the twists and turns that might take you to new places. But mostly, use common sense, think things through, and when it doubt, by all means - wait till it passes.